History of the Pythagorean theorem

Proof of the Pythagorean theorem

Usually in a right triangle, we need to find the length of the third side when we already know the length of other two sides. For such problems, we can directly use the formula to calculate. In many problems, we need this theorem to solve many complex questions. And then, I will introduce two basic method to prove the Pythagorean theorem.

Assume a, b are two Right-angle side (b > a) and c is Hypotenuse. Then each area of a right triangle is equal to ab/2. 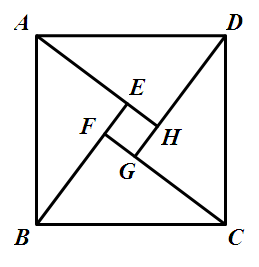 ∴ ABCD is a square with side c, and the area of ABCD is equal to c2.

Just like we said before, Euclid gave us a good proof in his Euclid’s Elements. He also used method of symbolic-graphic combination.

In the first, we draw three squares and the side of each square are a, b, c. And then, let points H、C、B in a straight line. Next we draw two lines between F、B and C、D and draw a line parallel to BD and CE from A. This line will perpendicularly intersect BC and DE at K and L. 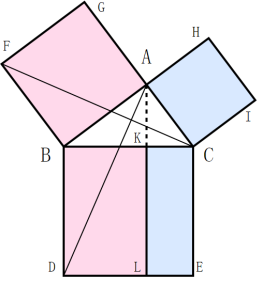 The Pythagorean theorem’s development has exerted a significant impact on mathematics. And this theorem gave us an idea to solve geometric problems with Algebraic thinking. It is also a great example about symbolic-graphic combination. This idea is very important for solving mathematical problems. By the Pythagorean theorem, we can derive a number of other true propositions and theorems, which will greatly facilitate our understanding of geometry problems, but it also has driven the development of mathematics.

Have you ever pondered where mathematical equations come from or how they were derived? If the answer is yes, I want you to think if you have ever wondered where the Pythagorean theorem came from. Whether you’re in geometry, trigonometry, algebra or calculus you have to admit that we see this theorem often in each one of these math classes. Wow, it seems like it’s stalking us! Well we can thank a few cultures for that!

Pythagoras is from Samos Island. From a young age he was very well educated but, at the time, his passion was poetry not mathematics. However, later on Pythagoras stated to become much more interested in math and science because of the influence of Thales. Pythagoras even traveled to Egypt and he attended math related lectures there. As he gained more interest in mathematics he decided to move to the island of Croton fulltime, and specialize in Geometry. It wasn’t until later in his career that he derived the Pythagorean Theorem.

What is the Pythagorean theorem?

The cool thing about the Pythagorean theorem is that it is known to be one of the earliest geometry related theorems! The theorem states that in right triangles the square of the hypotenuse equals the sum of the squares of the other two sides. This may be a little bit confusing written out in word so I have provided a picture below! In this particular picture, c2 = a2+b2. Hopefully that makes more sense! Now lets break down the Pythagorean theorem just a little bit more. Imagine that you have two square of two different sizes and you used them to construct multiple right triangles. Now I know that this sounds a bit confusing and you may be thinking how can I get multiple triangles from just two squares? Well, What if we put the smaller square in the center of the larger square, but we rotated the small square slightly so that it resembled a diamond. It should look something like this! Now you are able to divide the drawing up in different lengths by using different variables. From the drawing you can see that the letter “c” labels each side of the diamond or the Hypotenuse (the longest side) of the triangle.   The letter “a” labels the shortest side of the triangle and “b” labels the medium size leg of the triangle. Also notice that side “a” and side “b” both create a right angle within the triangle. I’m sure that this is making sense visually but not mathematically. Well then, I will explain in mathematical terms how these two squares and this picture relates to the Pythagorean theorem.

What can we do with the Pythagorean theorem?

Like I said before the Pythagorean theorem is used on right triangles. More particularly we use the theorem when we know the value of two sides of the triangle and we want to find the value of the remaining side of that particular triangle. We can also find the distance between points with this theorem. The Pythagorean Theorem is often used in higher-level math classes like calculus. For example in calculus three, we use this theorem to find the distance between two points on a plane, finding the surface area and volume of different shapes and etc.

Thanks to Pythagoras, the Babylonians and the Chinese we have the Pythagorean theorem. The famous theorem is a^2 + b^2 = c^2. We are able to derive this formula by taking the area of a square. And lastly the theorem is used a lot in finding the side lengths of a triangle and is also helpful in higher-level math courses.

Zhao Shuang was an ancient Chinese mathematician who lived in the 3rd century CE. He spent his life on the study of the book called “Ling Xian” from famous Chinese scientist Zhang Heng and the ancient arithmetic book called “Zhou bi”. Zhao Shuang’s main achievement was summarizing the ancient mathematical achievements about “Gou gu mathematics” from the Han dynasty. Meanwhile he rediscovered the “Gou gu therorem”, which is actually the Chinese version of the “Pythagorean theorem”. He wrote hundreds of articles about “Gou gu geometric figures”, which are the earliest records of using several propositions to prove the sum-difference relations between the three sides of a triangle. In addition, he explored the roots of the quadratic equation, and he even put forward some conclusions, which are similar to Vieta’s formula (see the last link).

The most famous achievement of Zhao Shuang is an article with five hundreds words, which gives a brief proof of the “Gou gu theorem”. In that, he used figures to prove this theorem. And here I give two ways to show that.

A figure used to illustrate the proof of the “Gou gu theorem.”

Proof 1: Set a right triangle. Its two legs have lengths a and b respectively (assume b is larger than a) and the hypotenuse has length c. (In ancient Chinese we call the leg with length a as “gou”, leg with length b as “gu”, and the hypotenuse as “xian”, that’s why we call this theorem as “Gou gu theorem.”) Then four of such right triangles combine with a small square whose edge length is (b-a) to make a big square whose edge length is c. The small square is the white inner part of the picture below. Then apparently the area of the big square is c2, which can also be seen as the sum of the areas of the triangles and the small square. So we can get that 4ba/2 + (b − a)2=c2, from this we can get that c2=a2+b2. Thus it shows that the square of the hypotenuse (the side opposite the right angle) is equal to the sum of the squares of the other two sides.

These two proofs use the figures to show the “Gou gu theorem”, and both of them are very brief. They reflect the wisdom of ancient Chinese people. Also they are one of the great achievements of Zhao Shuang.
Links:
http://books.google.com/books?id=_q3DTqHfSFAC&pg=PA259&lpg=PA259&dq=zhao+shuang+math&source=bl&ots=P43wfC0zD_&sig=ReVMYnPYQfvNrmCM8xc2MdO9siw&hl=zh-CN&sa=X&ei=gDwVVJPJCZPkoASlkYH4Bg&ved=0CD4Q6AEwAw#v=onepage&q=zhao%20shuang%20math&f=false
http://baike.baidu.com/subview/77313/6501498.htm
http://en.wikipedia.org/wiki/Pythagorean_theorem
http://en.wikipedia.org/wiki/Vieta’s_formulas