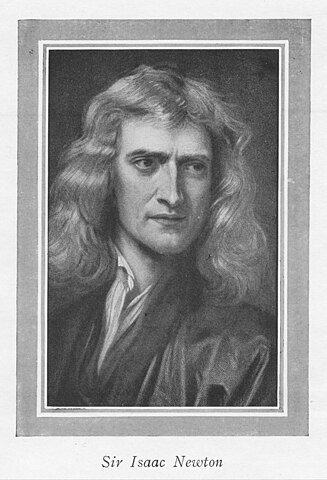 In class we discussed the Fundamental Theorem of Calculus and how Isaac Newton contributed to it, but what other discoveries did he make?

Sir Isacc Newton was born on January 4, 1643, but in England they used the Julian Calender at that time and his birthday was on Christmas Day 1642. He was born in Woolsthorpe-by-Colsterworth, a hamlet in the county of Lincolnshire. His father had already passed prior to his birth and his mother remarried after his birth and left Isaac to live with her mother. He went to The King’s School, Grantham from the time he was twelve until he was seventeen. His mother removed him from school after the death of her second husband, but later allowed him to return by the encouragement of the school’s headmaster. He rose to be at the top in rankings in his school, mainly motivated to get revenge towards a bully. He began attending Trinity College in Cambridge in 1661. After receiving his degree he developed his theories on calculus over the span of two years during the plague [1].

Newton’s work in calculus intitially started as a way to find the slope at any point on a curve whose slope was constantly varying (the slope of a tangent line to the curve at any point). He calculated the derivative in order to find the slope. He called this the “method of fluxions” rather than differentiation. That is because he termed “fluxion” as the instantaneous rate of change at a point on the curve and “fluents” as the changing values of x and y. He then established that the opposite of differentiation is integration, which he called the “method of fluents”. This allowed him to create the First Fundamental Theorem of Calculus, which states that if a function is integrated and then differentiated the original function can be obtained because differentiation and integration are inverse functions [2].

Controversy later arose over who developed calculus. Newton didn’t publish anything about calculus until 1693, but German mathematician Leibniz published his own version of the theory in 1684. The Royal Society accused Leibniz of plagiarism in 1699 and the dispute caused a scandal to occur in 1711 when the Royal Society claimed Newton was the real discoverer of calculus. The scandal got worse when it was discovered that the accusations against Leibniz were actually written by Newton. The dispute between Newton and Leibniz went on until the death of Leibniz. It is now believed that both developed the theories of Calculus independently, both with very different notations. It should also be noted that Newton actually developed his Fundamental Theory of Calculus between 1665 and 1667, but waited to publish his works due to fear of being criticized and causing controversy [1].

Newton not only discovered calculus but he is also credited for the discovery of the generalised binomial theorem. This theorem describes the algebraic expansion of powers of a binomial. He also contributed to the theory of finite differences, he used fractional exponents and coordinate geometry to get solutions to Diophantine equations, he developed a method for finding better approximation to the zeroes or roots of a function, and he was the first to use infinite power series.

His work and discoveries were not limited to mathematics; he also developed theories in optics and gravitation. He observed that prisms refract different colors at different angles, which led him to conclude that color is a property intrinsic to light. He developed his theory of color by noting that regardless if colored light was reflected, scattered, or transmitted it remained the same color. Therefore color is the result of objects interacting with colored light and objects do not generate their own colors themselves [1].

Sir Isaac Newton was a truly amazing mathematician and scientist. He achieved so much in his lifetime and the amount of discoveries he made can seem almost impossible. He helped make huge advancements in mathematics and created theorems that we still use heavily to this day.