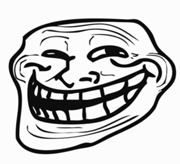 The Urban Dictionary defines the word troll as:

Based on the final definition, I would like to propose that Pierre de Fermat pulled off the greatest troll in mathematical history (possibly unintentionally). Problem II.8 in the 1621 edition of the Arithmetica of Diophantus. On the right is the margin that was too small to contain Fermat’s alleged proof of his “last theorem”.

Fermat was a French lawyer and mathematician who is remembered for things like discovering an original method of finding the greatest and the smallest ordinates of curved lines, and researching number theory, analytic geometry, probability and optics. Basically, he did a lot of math stuff; however, his most famous contribution to mathematics is referred to as Fermat’s Last Theorem or FLT. This marvelous contribution was written in the margin of a book. Fermat simply wrote:

“It is impossible to separate a cube into two cubes, or a fourth power into two fourth powers, or in general, any power higher than the second, into two like powers. I have discovered a truly marvellous proof of this, which this margin is too narrow to contain.”

An incredibly poignant theorem, but he just didn’t have space to write out it’s proof. Fermat later proved FLT for the specific cases n=4, but left his too-wide-for-the-margin proof unwritten.  For the next 358 years mathematicians worked night and day to figure out exactly what couldn’t fit in that little margin.

On Monday 19 September 1994, Andrew Wiles, an English mathematician with a childhood fascination with Fermat’s Last Theorem, finalized a correct and elegant proof for FLT. Almost 400 years of work had finally culminated in a seemingly magical proof. It was a national holiday and people ran from their houses yelling “FERMAT IS SOLVED!!! THE WORLD IS AT PEACE!!!”. I kid. That didn’t actually happen, but someone did write a poem about it:

Fermat said the proof was too large
to fit in the right or left marg-.
True, back of the paper
or proof made to taper
might help, but he said, “I’m in charge.”

Now Wiles didn’t mind paper waste.
In fact, it was true to his taste
to use up whole reams
to realize his dreams
and he crossed out instead of erased.

Fermat was all snickers and smiles
as he smugly stayed clear of the aisles
and he thought “they’ll be glum
“but that proof will succumb
“though it’s going to take quite a-Wiles.”

Cohen takes the point of view that Fermat was conscious of his choice to never write down his proof. This raises the question – did Fermat actually have a feasible proof? If he didn’t, was he planning on upsetting the mathematical community for 400 years?  Let’s look a little deeper.

Fermat’s note first appeared in a collection of his edited works that was published by his son Samuel in 1670. This wasn’t the only time that Fermat claimed to have a proof, but didn’t have the time or paper or something to write it out. More than a century later, mathematicians like Euler had to reconstruct proofs for many of Fermat’s theorems.

One way to address his note is to claim that Fermat’s comment was simply a private note that he never intended to publish. Simply a little “Hey self, write this awesome, brilliant proof down later. You didn’t write it now because you had no paper. Love, me”. This wouldn’t really make sense. In his day and age it was pretty normal to write and publish commentaries on ancient works. The publishers intentionally left large margins in such works so that modern commentators could write their comments and show their contemporaries how much smarter they were than their forefathers. Basically, we can be pretty confident that Fermat was at least considering that his work would be published.

When I was researching this subject, I came to the realization that this story could have ended differently. Fermat didn’t publish a lot of his work. What if he had decided to publish his commentary on the Diophantus after all? What if he decided to publish his commentary after he had worked out the proof for n=4  and then decided that he didn’t have a proof for the theorem after all? What if he had edited out his comment? We wouldn’t have Fermat’s Last Theorem. He wouldn’t have sent mathematicians on a blind-leading-the-blind hunt in the forest. Wiles may have never had a reason to devote his life to proving FLT. Essentially, it was fortunate for the development of number theory that Fermat wasn’t prone to editing his papers. Or did he intentionally avoid editing so as to troll future generations — make them think he had all these brilliant ideas and proofs, but end up just making them work and argue down (what he thought) was a rabbit hole? Wiles’s proof involves mathematics that wasn’t  invented or discovered (that’s the topic of an entirely different blog post) until centuries after his death. The mathematical historian Howard Eves once said that “Fermat’s Last Theorem has the peculiar distinction of being the mathematical problem for which the greatest number of incorrect proofs have been published.” Did Fermat use his version of an online forum to post his version of a troll? Or did he genuinely believe he had a solution that would have been proved incorrect? Or did he actually have a brilliant proof that doesn’t use any of Wiles’s modern math? We will never know, but I think the image of Fermat as the first comment troll is the most fun.