I’ve heard a lot of stuff about Common Core curriculum lately. My friends’ children are experiencing math for the first time and my friends are having trouble helping them with their homework because it’s not the way we were taught. At first I agreed with their outrage and didn’t know why they would want to change years of methods that worked just fine in teaching us the ways of mathematics. That was until I started seeing how our system of math has changed over the years in many different countries and many different cultures. 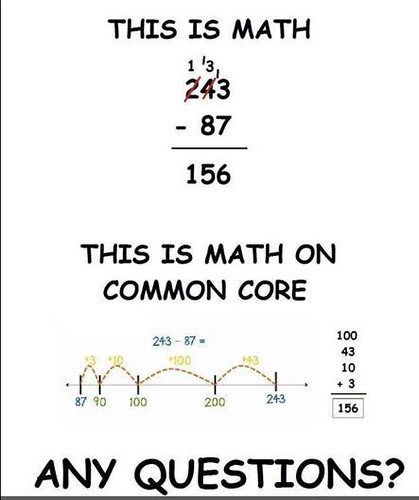 Steinmetz, F. On Common Core Math. Retrieved from The Ferrett.

Early Egyptians had a way of doing math that many would find different until you had it broken down and explained to you. In the end it’s not much different than some of the math we know now. In Count like an Egyptian, by David Reimer, you see that math was used for a function and was quite simple but rather complicated in its simplicity. They used unit fractions, with only a one in the numerator and fractions only going up to 1/2, with 2/3 and 3/4 being used in very rare cases. In my opinion, using only unit fractions was a unique way to divvy up wages, land, or other commodities to workers as fairly as possible to each individual, (Reimer, 2014). The bookkeeping that they kept was detailed and a great way to look at early mathematics that would make most people look at it the same way they look at Common Core math now.

During the eighteenth century Euler was a great mind learning things on his own. He started life believing he wanted to be a philosopher and a minister like his father, but his love for mathematics overtook that desire quickly. He did everything he could to learn as much as he could. Even when Johann Bernoulli, who had succeeded his brother Jacob in the chair of mathematics at the University of Basel, wouldn’t privately teach him he strived to study on his own and ask for help when he needed to. He was approaching math ideas that few before him could understand and few could help him with. His studies on Fermat’s Last Theorem started a new look onto many ideas that came before him. It also lead him the write an amazing book called Elements of Algebra that many still look at. It starts with basic arithmetic, and then soon goes into more complex things that most children don’t see until later on in their studies in high school, but he felt they were a basis to understanding the simplest of ideas in arithmetic, (Laubenbacher & Pengelly, 1999). His approach is different than what I grew up learning, just as Common Core is different for children nowadays than what their parents learned.

Common Core curriculum doesn’t have to be the bad thing that I’ve heard many parents complain, but it is a different approach to ideas we know now. It’s only a set of standards applied, that doesn’t necessarily have to be used, but is a new curriculum that is introduce to many teachers and they use it as a starting off point to build their own lesson plans. It’s only what children need to know and understand by a certain age, not actual problem sets. But what we forget is the struggle it was for us to learn the easy math that we face every day. When I was younger I remember the many hours we spent on memorization, learning new things and never questioning why these new things worked. Being told that this is just how you do this. Never questioning where these ideas came from and just trudging through until it came easy to me. We never really think about the time that we spent learning the language of mathematics. We take for granted all the effort that went into the methods that brought the way we learned math, all the hard work mathematicians put in forming the methods we used when we were learning. The new curriculum that has been introduced is a different method than memorization.

The difference between the math we learned is that a simple problem to us was 3000-2999=1, where we need to remember how to borrow and bring over numbers from all four rows. In Common Core curriculum it takes the approach of adding instead of subtracting. 2999+1=3000. Most kids can understand adding way quicker than subtracting. Another example could be 32-12=20, with a couple steps to us, as memorization kicks in from our learning, this is quite easy. But we still forget the struggle we had learning those steps and memorizing that 2-2=0 and 3-1=2. In the new method they add to get to the top number, 12+3=15, 15+5=20, 20+10=30, and 30+2=32. Then they add the numbers they used to add up to the top number and get, 3+5+10+2=20. This may seem like a longer way, but in fact it gives a reason as to why 32-12=20. And how long did it take us to memorize the rules of subtraction to be able to do it in three lines instead of five lines? I’m not sure one is longer than the other, but the new method seems to be teaching more of the why instead of this works just because. It also doesn’t look much different than how the Egyptians tended to do math either. They tried to keep things simple and only had symbols for ones, tens, hundreds, thousands, etc. They didn’t overcomplicate things and did their best to have to write as little as possible. If we make *=1,000, &=100, $=10, and #=1, this is how a typical problem look to them ***+&&&&+$$+#####=3,425. Counting each symbol is the method they chose instead for addition and it was good for many years. It reminds me very much of the way some teachers are approaching math problems today.

Many people have changed the way we do math, and there have been many ideas they may not have been the best approach, but in the end every mathematical discovery or method has moved us farther in the field. It all had to start from somewhere. There were many people who started an idea and who were looked at like they were crazy, being told that their method was wrong and would never reach the masses as well accepted. It didn’t stop them, and who’s to say that Common Core won’t produce some great breakthroughs? Great minds are never limited to the well-known and understood. From early Egyptians to Euclid, who knows what great minds will come through Common Core mathematics to change the world and our methods for the better? Only time will tell and hopefully in the end we can have our children teach us a thing or two on how this language is spoken in the future.