You have been told from the time you started school that math was important because math is everywhere. Did you ever believe that? The point of this post is to prove that statement. Math is everywhere, specifically the golden ratio.

The golden ratio is obviously found in the world of mathematics. The golden ratio is created when one can divide a line in a unique way. Imagine being presented with a wooden plank to cut. Where should I make the cut? There is one unique place you could cut that would give you the golden ratio. This mean that the ratio of the larger piece to the smaller piece is the same ratio as the larger piece to the entire plank prior to being cut. We could then cut that smaller piece at a certain point and get a piece one and piece two such that the ratio of piece one to piece two is the same ratio as piece two to the whole smaller piece. And the process could continue. So what makes that so special? It is special because this proportion doesn’t just appear in mathematics; it appears in your body, nature, architecture, and the solar system. 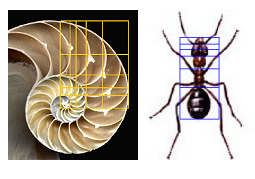 It was always said that beauty is in the eye of the beholder, but is that really true? What if I told you that beauty was based on the golden ratio? Would you believe me? There is sound basis in scientific study and evidence to support that what we perceive as beauty in women and men is based on how closely the proportions of facial and body dimensions come to Phi.2 “For this reason, Phi is applied in both facial plastic surgery and cosmetic dentistry as a guide to achieving the most natural and beautiful results in facial features and appearance.”2

Because of the constant presence of phi in nature, we, as a civilization, have brought the golden ratio into many of our masterpieces in art. Consider the Egyptian Pyramids. It is said that the ratio between the height, base, and hypotenuse is the golden ratio. Greeks were aware of the golden ratio when they built the Parthenon.1 It is quite obvious if you have seen the movie, The Da Vinci Code, that Leonardo Da Vinci used phi in his classic drawings. The painting of the Last Supper used the golden ratio to determine the placement of Christ and the disciples to the table, walls, and windows around them.1 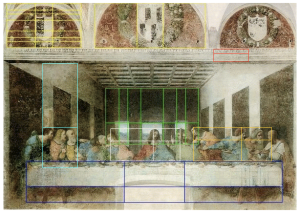 The golden proportion is in places where we would never imagine. Next time you buy a bottle of Pepsi, look very critically. How did they decide where to but the circular logo or how big to make the logo or to what proportion the writing should be to the logo? These questions are answered by using the golden ratio. “It’s even being used in high fashion clothing design, such as in the “Phi Collection” announced in 2004 and covered by Vogue, Elle and Vanity Fair.”1

Do You Believe Me Now?

“In matters of reason, seeing is believing but in matters of faith, it is believing that first opens the door to seeing. The best way to know for yourself where Phi is present and where it is imagined is to explore with an open mind, learn and reach your own conclusions.”1This post was created to open your eyes to being critical of how things came to be around you. One can always ask the questions “Why?”. I challenge you to ask that question and play with the idea that the golden ratio may be the answer. Your opinion is your own. I can only present you with articles that either support or deny the importance of the golden ratio. This particular post was in support of its importance, but please feel free to read the following article that has a difference perspective. http://www.umcs.maine.edu/~markov/GoldenRatio.pdf

The Divine Proportion : A Study in Mathematical Beauty by H. E. Huntley

1 thought on “The Golden Ratio is All Around You”